A View to a Hunt

Trapped? What happened next?? 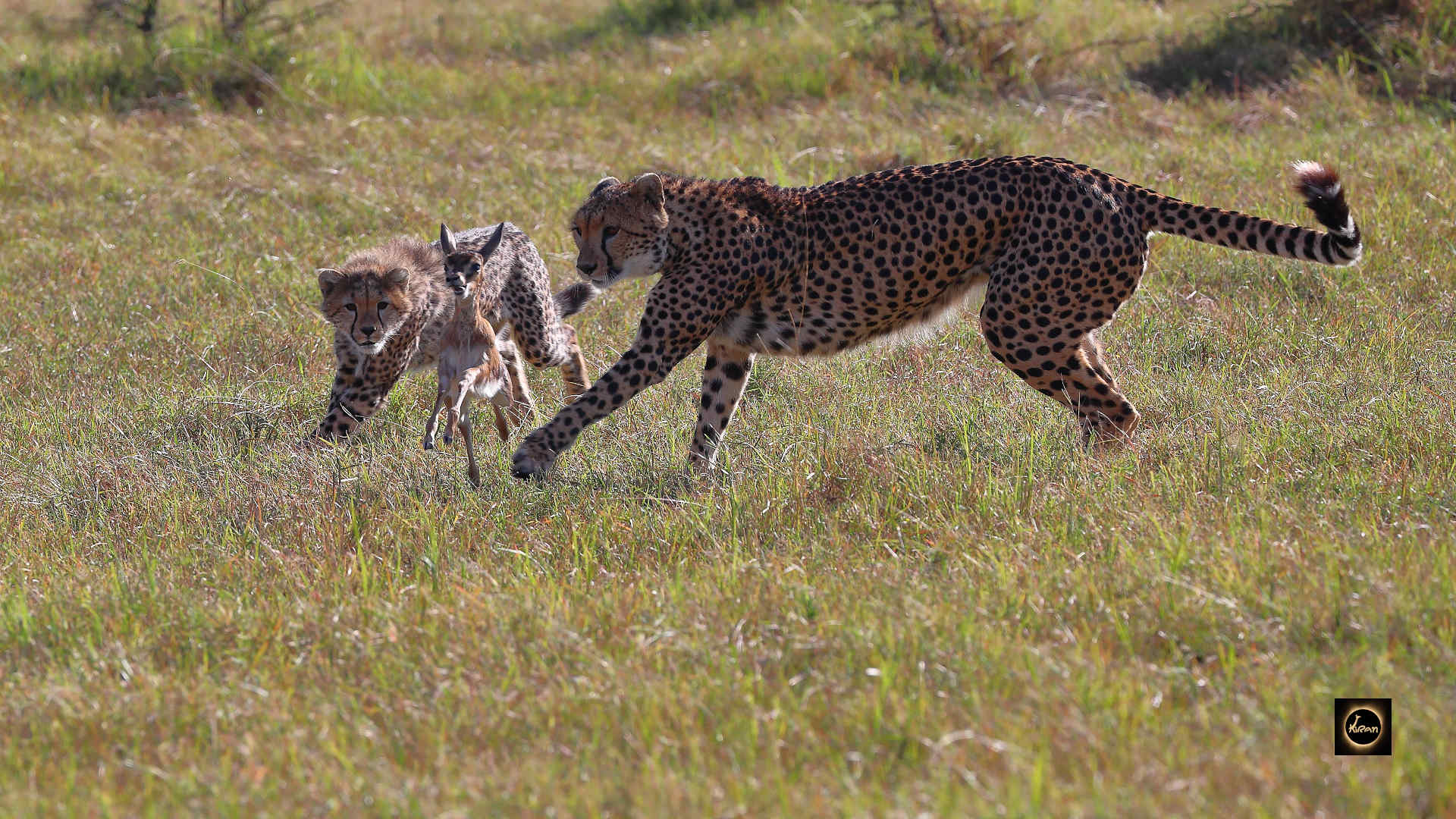 In fact, it is equally important to know what transpired before I clicked this image.

It was a glorious morning on the plains of Masai Mara, Africa. We spotted this mother cheetah and her cub on the plains. On closer observation we figured they were keenly scrutinizing a large herd of Thomson Gazelles, obviously with the intention to hunt one of them. After a while the mother took her stalking posture and started advancing towards the herd slowly but decisively with the cub in tow. But alas, a hyena appeared on the scene and obviously keeping security of the cub in her mind the mother gave up on hunting.

We also got news that a huge male leopard was prowling close by. So we left this scene, tracked the huge Kaboso male leopard (more about that some other day), clicked a few good images and retuned to this scene just in time to witness a great drama that was to unfold before us.

The hyena had disappeared. Mother cheetah again started stalking. We all had our cameras ready. However, without warning she sprinted towards the herd and I realized I was watching the fastest land mammal in action for the first time in my life. By the time I recovered from the excitement and the shock and started firing shots, she had already pounced on a gazelle fawn that had no defense against a determined cheetah. I thought that was the end of it.

But within few seconds we saw, the mother was carrying the fawn towards her cub but the fawn was alive and was struggling to get free from the jaws of the cheetah. Mother dropped the fawn in front of her cub. The moment the fawn hit the ground it started running away from the cheetah duo and the cub immediately started chasing it. I then realized, this was no ordinary hunt sequence but a combination of hunt and hunt training.

Couple of times the cub caught up with the fawn only to realize that at the last moment the fawn had escaped. Seeing this the mother cheetah again joined the hunt and the picture at top depicts how they trapped the fawn. The mother caught it and again offered it to her cub, alive. Again, the fawn tried to escape and the cub almost caught up with it only to lose it again. 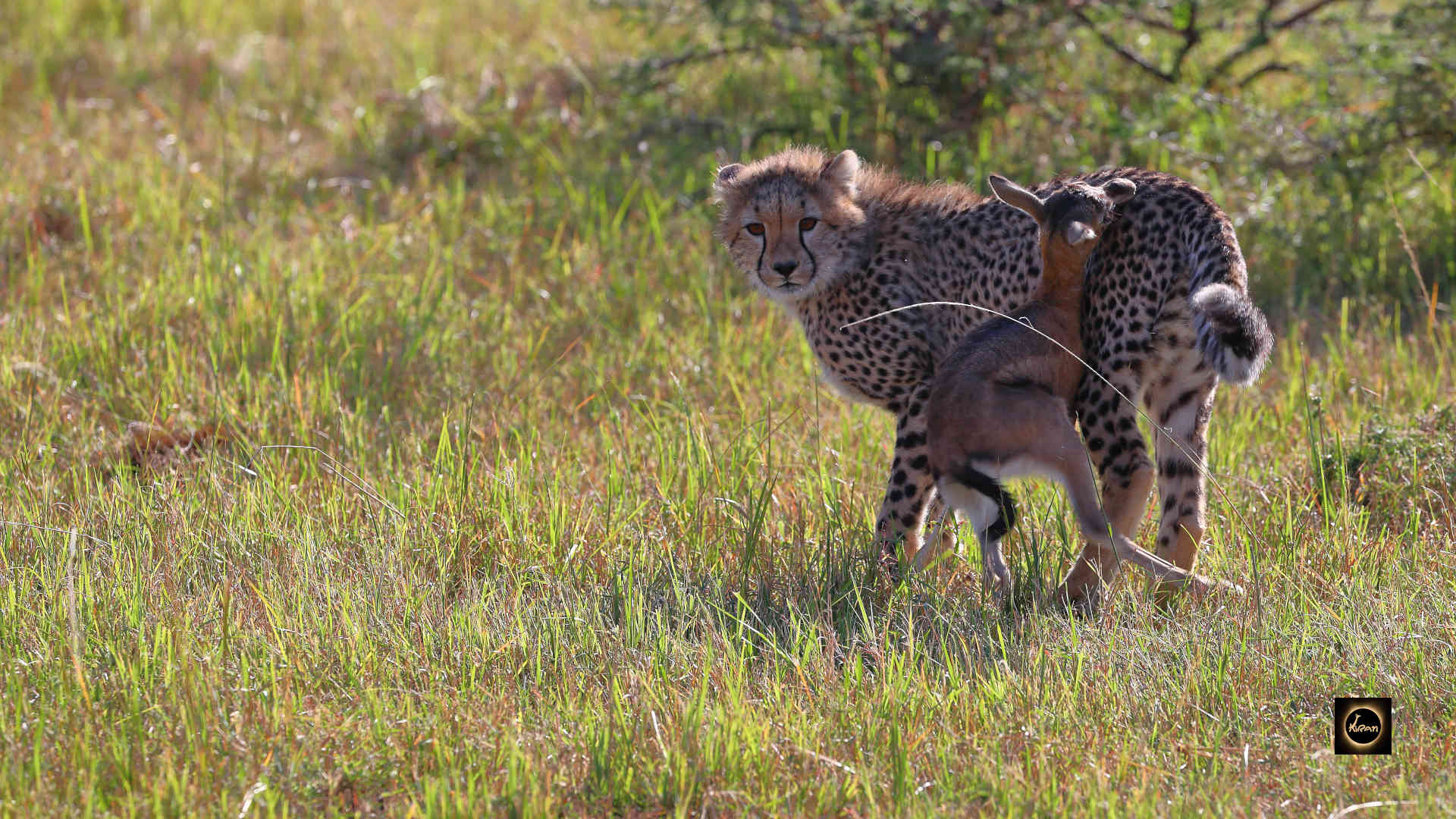 This picture depicts one such moment of capture, panic, confusion and escape. Cub chased the fawn for some distance and caught up with it. The next moment the fawn was on the ground and the cub was towering above it. But before the cub could deal the final blow to the fawn, it got back on all four and ran for its life one more time. This picture was clicked just then. Inexperience of both the fawn and the cub is so obviously seen here. In its attempt to run away from the cheetah cub, the fawn actually collided with it. The bewildered cub just could not figure out what to do next! The fawn recovered its poise quicker and escaped from the cub one more time before the inexperienced cub could regain its composure. The race continued thereafter. 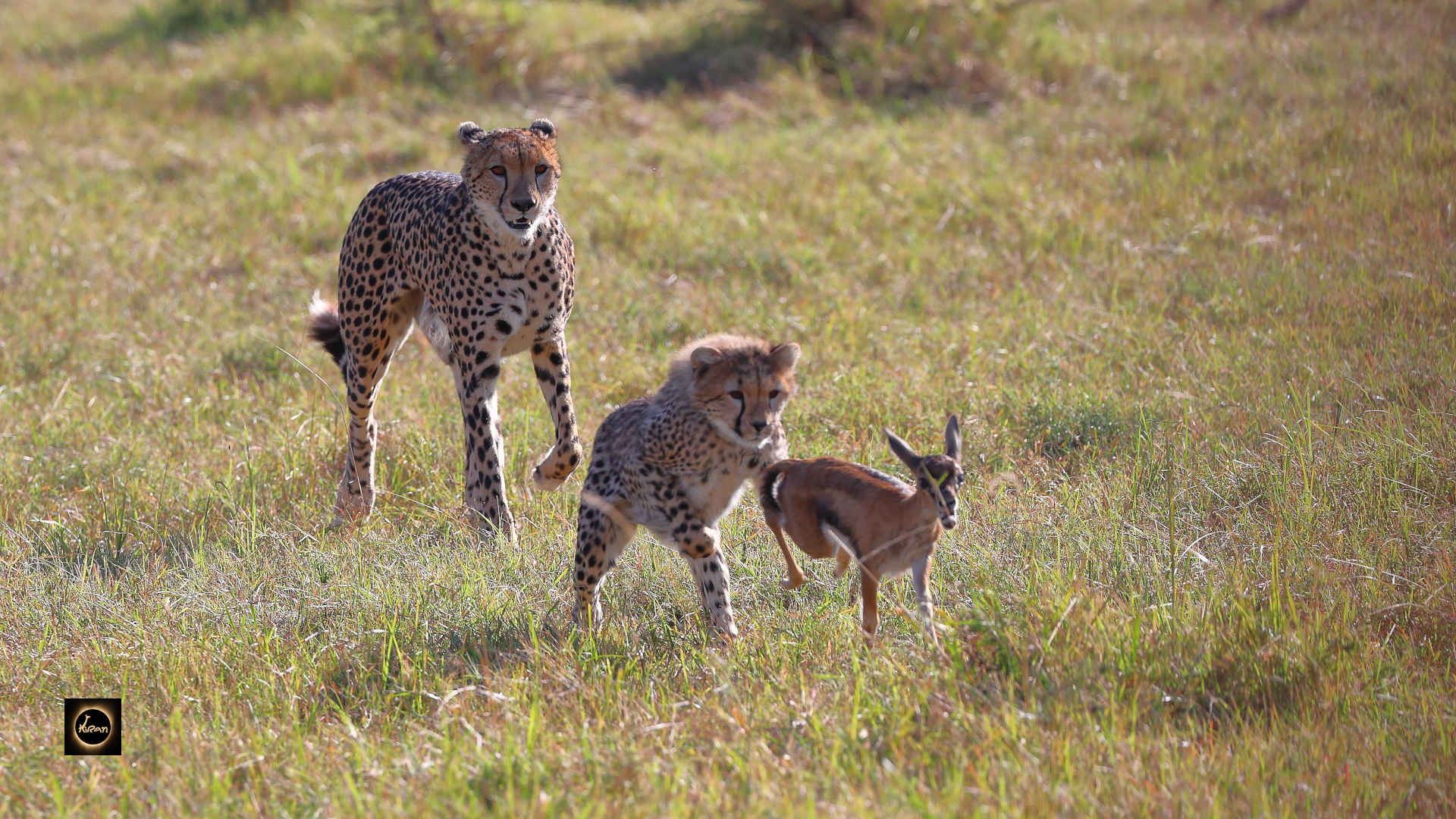 This picture documents an epic wild life history moment. The fawn is running for its life and is being chased by the inexperienced cheetah cub. Mother cheetah is backing up behind the cub, so that the fawn is never out of her reach. 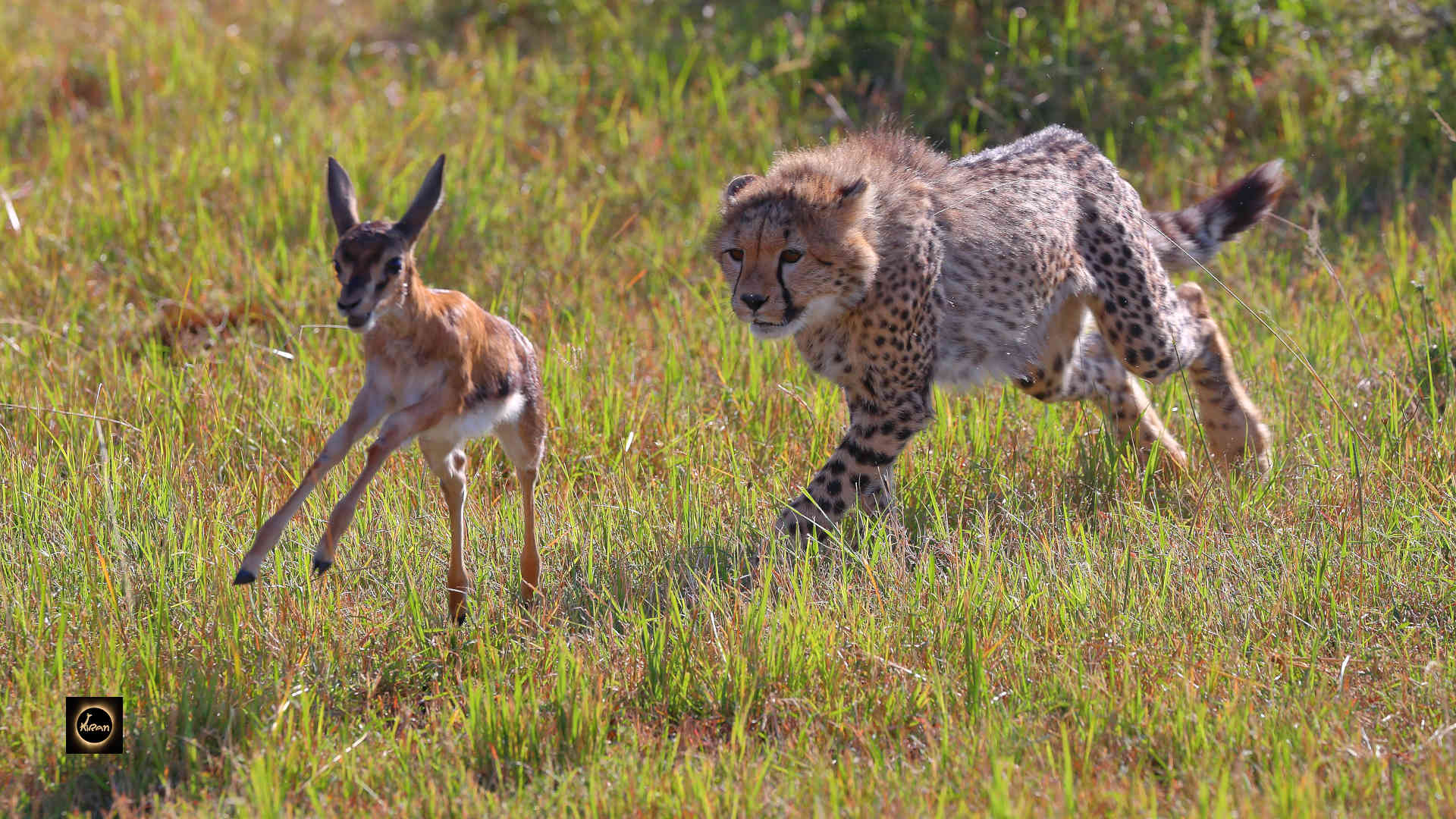 Here is another snapshot or an instance of wildlife history moment that I captured during the epic hunt of the gazelle fawn by the cheetah and hunt training of a cheetah cub during that hunt. 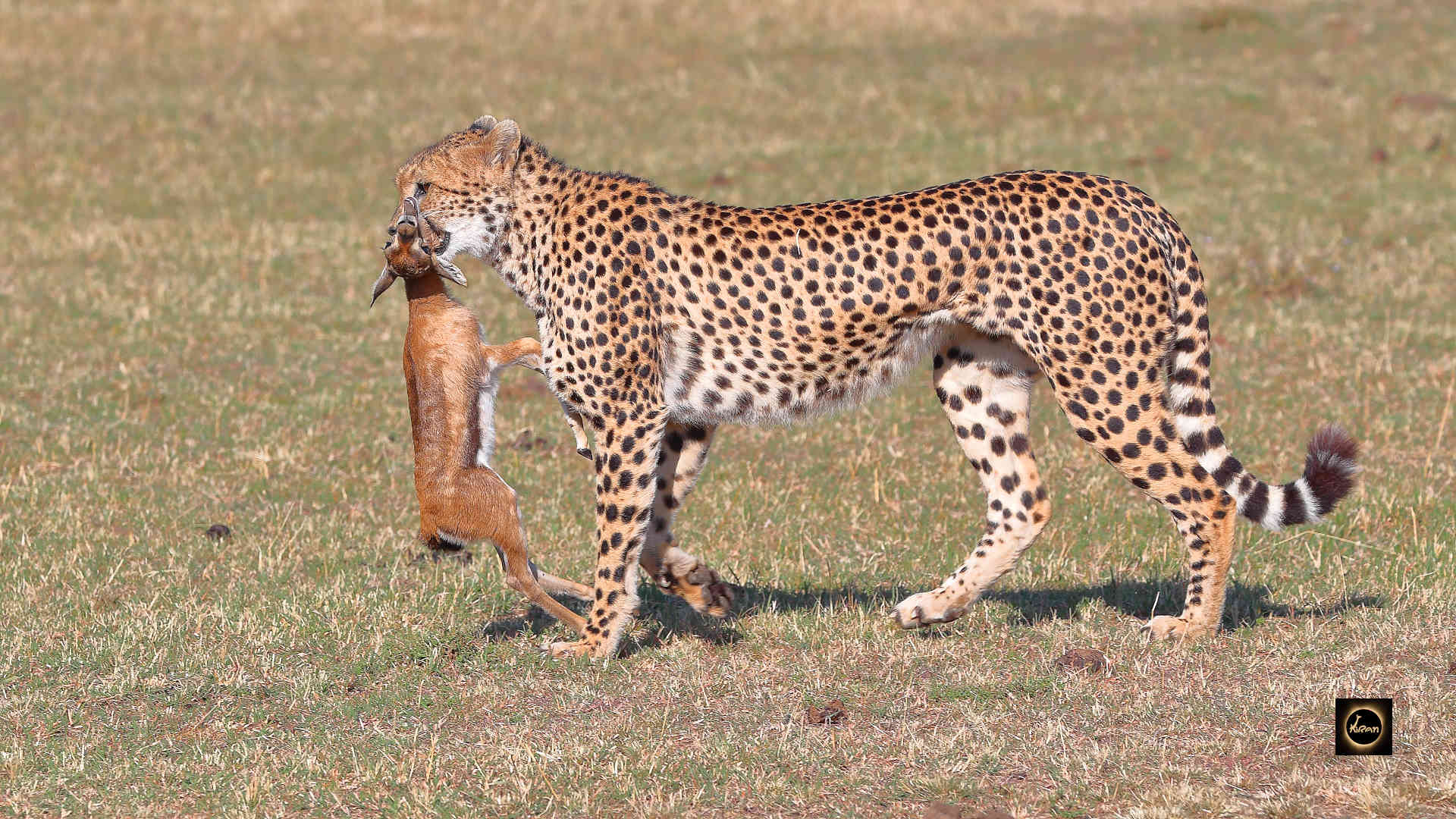 Finally, the mother cheetah again caught the fawn, killed it and then the mother and the cub feasted on it.

Do you think the saga finally ended there? 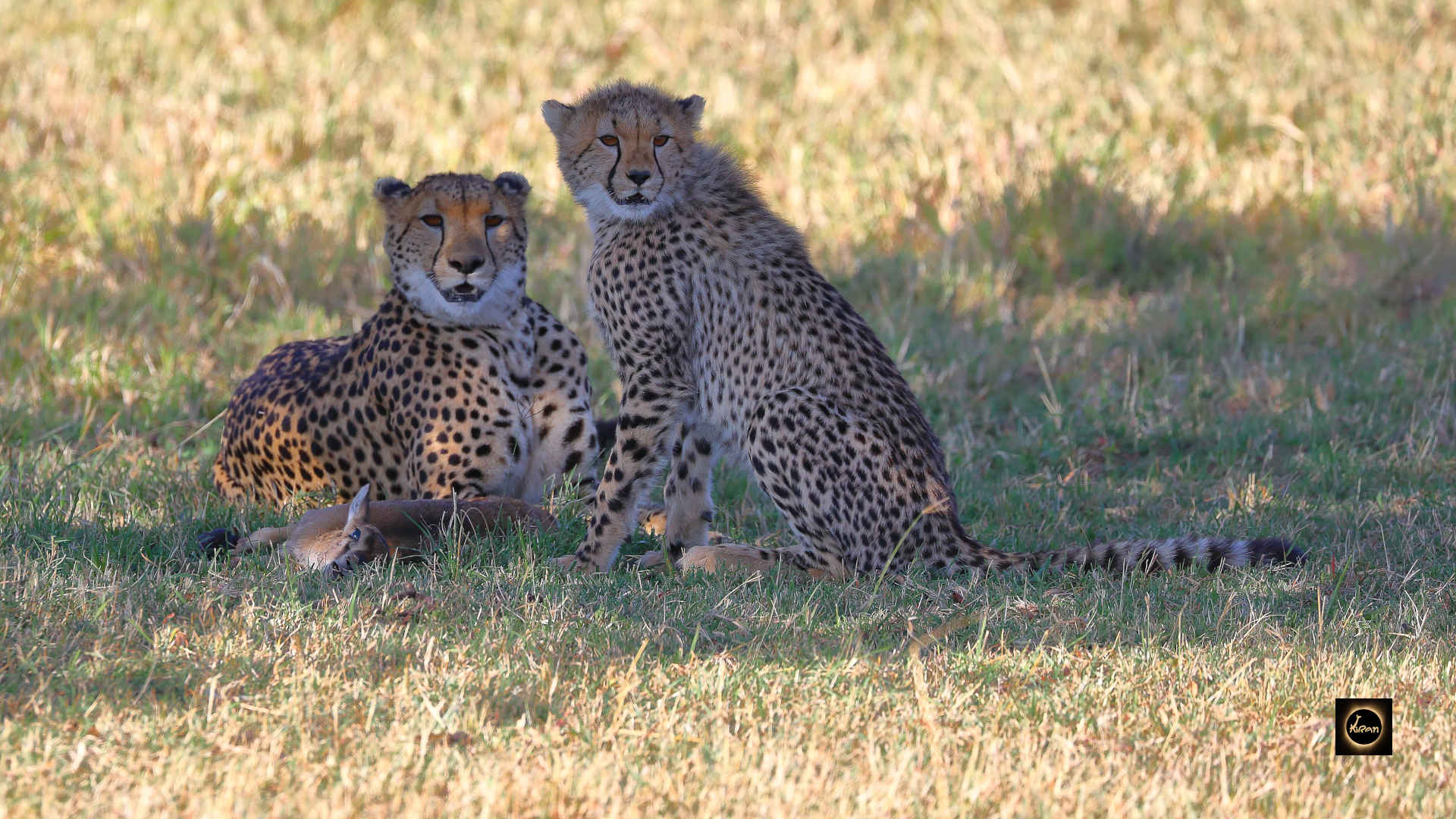 Some hunts succeed and the hunters get the food and nourishment that they need so desperately. Many other hunts fail and the potential prey escape and save their precious lives. Such is life! As an observer one just witnesses such events without intervening (that is, assuming it is possible to intervene at all, in the first place!).

Well we will all naturally think this is the end of this story?

Couple of days after this incident our naturalist informed us that only the mother cheetah is being sighted now for long periods of time, without the cub. The obvious conclusion being, the cub must have been attacked by a lion or a hyena after this hunting incident.

Such are the ways in the wild. One day a hunter, next day the hunted!

An abridged version of this article in Marathi language was first published in Marathi daily Samana in July 2019. I wish to express my gratitude to the publishers of Marathi daily “Samana”.